Darling is a best-selling author of The Original Jesus (Baker Books, 2015), The Dignity Revolution (Good Book, 2018), The Characters of Christmas (Moody, 2019), The Characters of Easter (Moody, 2021), and A Way with Words (B&H, 2020). He is also a columnist for WORLD Opinions and a regular contributor to USA Today. His articles also have appeared in Christianity Today, The Washington Post, The Washington Times, TIME, The Huffington Post, National Review, and First Things. Darling hosts the popular weekly podcast, “The Way Home.”

In addition to these accomplishments, Darling has served in pastoral ministry in Tennessee and Illinois. He is married to Angela, and they have four children.

"Conservatives like who care deeply about the family, about the sanctity of unborn human life, and about the renewal of our communities and institutions, should see immigrants not as adversaries, but as allies."
https://thedispatch.com/p/conservatives-should-see-immigrants

Loved this tribute to David McCullough for @TheLandCenter by @JDWilsey

Brand new column for @WNGdotorg: why Christians should be wary of "barstool conservatives" https://wng.org/opinions/no-babies-at-the-barstool-1660650285

Here is a new piece I wrote for @thedispatch on immigration, the electoral shift, and opportunity for conservatives https://thedispatch.com/p/conservatives-should-see-immigrants

Look what just arrived! You'll want this book by @jasonthacker in your library 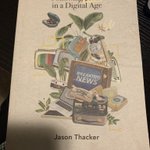